The date and venue for the talk "Buying a car" has now been fixed. If you wish to attend the talk and get a few tips on how to save $$$ on COE, register now.
http://tklcloud.com/book/14
Posted by Tan Kin Lian at 10:29 PM No comments:


Here are some indicative premium rates for a level term insurance with critical illness. It helps the consumer to decide on choosing 20 or 25 year term and gives benchmark premium to compare with other insurers.
this policy is taken individually and is not part of a group insurance scheme.
http://tankinlian.com/admin/file.aspx?id=796&IID=803

Teaching students how to solve problems 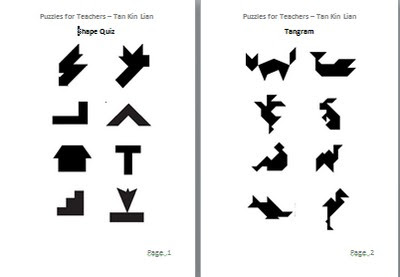 I gave a 2 hour talk to teachers of primary 1 and 2 in a school on the use of shape quiz and tangram to teach pupils about solving puzzles. They enjoyed it. They placed an order for 400 books on these puzzles to be used by their pupils, using their edusave funds. The school gets a 50% discount on these books.

Schools interested in this talk can write to inbox@tankinlian.com

Parents can order the books for their children and help them to develop the skill of problem solving.

The Monetary Authority of Singapore (MAS) has stated that they currently do not
regulate schemes that purport to be alternative investments and typically do not
involve an offer of securities.

I wish to point out that two categories of these investments could possibly fall
under the existing framework that MAS is already responsible to supervise.

A few investment schemes involving the purchase of gold bars promise to return
a fixed rate of interest and the return of capital at the end of the period. This is akin
to taking deposits, which is already regulated by the MAS. The investors were not
buying the gold bars, which were priced above its real market value, but were enticed
by the higher promised return.

Several investment schemes were being promoted that involve the collection of money
from investors into a company to make lucrative investments in projects in emerging
markets. This is similar to the issue of securities.

MAS has also stated that it is an offence under the law to operate a fraudulent or
deceptive scheme. Where there are reasons to suspect fraud, they would refer the matter
to the Commercial Affairs Department for investigation.
Many members of the public, including those who have been defrauded, have asked the
question on where it took so long for the authorities to act on some of these scams, which
had been allowed to carry on for years and to acquire the mantle of authenticity.

I urge the authorities to strengthen its human resources to investigate these suspected
frauds early and to adopt a more pro-active approach in dealing with them.

For example, if there are reasons to believe that a fraud has been committed but the evidence
may not be conclusive, they can still ask the operators to discontinue the activity or face a
charge in court. This may be a sufficient deterrent.

Let us act early to preserve the good reputation of Singapore as a law abiding country, where
investors find it safe to invest their money here.
Tan Kin Lian
President
Financial Services Consumer Association
Posted by Tan Kin Lian at 7:43 AM No comments: