Hefty fee to witness a document

I have to sign a legal document, involving a foreign transaction, in front of a notary public in Singapore. I approached a legal firm and was told that the fee is $40 to witness each signature on each copy of the same document. The total fee for four copies is $160 plus GST. I guess that the actual work would probably take less than five minutes of the lawyer's time.

I checked with another lawyer and was told me that this is the standard rate recommended by some authorized body. I am puzzled, as there is a competition law in Singapore that is supposed to prevent collusion in setting unreasonably high fees.

I do not understand why a lawyer needs to charge $160 to witness a signature on 4 copies of the same document and why this simple task should only be done by a lawyer.

Higher wages will not lead to loss of jobs

I support the recommendation by Professor Lim Chong Yah to raise wages by 50% over three years for the grossly under-paid workers. For those earning $800 a month, the revised wage is only, $1,200, which is still below any sensible minimum wage required to meet the high cost of living in Singapore. Professor Lim's suggestion is quite moderate.

I disagree with the view of a Minister who claimed that the revised wage will lead to structural unemployment and a loss of jobs in Singapore. This statement is rhetorical and is not supported by economic common sense.

There will be loss of low paying, manufacturing jobs. Most of these jobs are carried out by foreigners, and not by Singaporeans, who cannot afford to survive on these wages. The removal of these jobs, and the reduced reliance on foreign workers, will help to reduce the over-crowding and demand on our public infrastructure.

There will be some loss of jobs, but the overall impact will be positive for Singaporeans, if Professor Lim's suggestions are implemented.

There will be an increase in the cost of living due to the higher wages. However, the impact is likely to be small, as the wages at the lower level do not form a large component of the total cost. The excessive profit margin and earnings of the highly paid managers have a bigger impact. Professor Lim has suggested a freeze on the earnings of the higher paid people.

It is also likely that the cost of rental, which now forms a significant proportion of cost, will reduce when wages are increased. Consumers will not pay the higher prices, so rentals and profit margin will have to moderate to make up for the higher wage cost.

I am disappointed that our ministers, who earn astronomically high salaries, continue to oppose moves to give decent wages to workers and reduce the big income gap in Singapore. It is time for Singaporeans to speak out against these bad policies.


I was at the Maybank branch in Penang to draw out some money by check from my own bank account. I had to show my passport for identification. There was some delay in paying the money to me, as the supervisor had to verify my signature with the Johore Bahru branch, where I kept my account.

Wages and housing in Penang

My Penang friend told me that the starting salary for a non-graduate in Penang is MYR 1,300 and for a graduate is MYR 2,000. They can buy a low cost house or flat for MYR 80,000. This represents a ratio of 60 months for the non-graduate and 40 months for the graduate, and is based on 1 person's income. This is affordable.

In Singapore, a HDB flat cost about 70 months of the combined income of two working parents. This is too high.


I was in Penang two years ago. My friend told me that there were many snatch thief and car breaking. He was especially cautious and did not leave valuables in the car. He also took special care to look after his belongings in the food center - in case someone runs away with them.

I was in Penang yesterday. Another friend took me to the food center in Jalan Macalister. She told me that the situation has improved considerably and Penang is now quite safe. She does not have to worry about crime, except in some places that should be avoided.

The improved condition was due to the new Police chief in Penang, who made special effort to deal with the high incidence of crime previously.

At the immigration checkpoint in Penang, I asked for the Immigration form and was told that it is no longer required. What a pleasant surprise! Congratulations to the Malaysian Government for getting rid of this useless form.

The Immigration form was created over 30 years ago, in the days before computer system. It was necessary to track the movement of foreigners into and out of a country. When computer systems were introduced and passports could be scanned on entry and exit, this form was not necessary. A few countries got rid of the form - the European Union and Dubai. Other countries simplified their form - UK, Australia and China.

Singapore continued to use the old useless form for foreigners entering into the country. It is time for Singapore to get rid of this useless form. We should move to the modern age and be bold to recognize what is no longer necessary.

Times have changed. It is time for Singapore to remove the Internal Security Act. There are more effective ways to deal with our security threats that are not subject to abuse by the authorities.

It is interesting to know that the Government officials are prepared to take legal action against a very big company, like Apple, for potential violation of the law.

Singapore follows the example of America in adopting a free market approach. We should also follow their practice of ensuring that the free market continues to be fair to consumers.

A better way to deal with the National Service sacrifice

David Lim, who is a permanent resident, wrote in the Straits Times Forum about "mixed feelings" watching his son, who is a citizen, graduate from National Service. He is worried that the increasing measures to "differentiate" citizens from PRs and the increasing resentment towards foreigners will make people like him feel that they do not belong to Singapore. It will also lead to a more ungracious society.

Over the past many years, I have spoken to many PRs, especially those from Malaysia, to ask them to convert to Singapore citizens. They told me that they had strong family and sentimental ties to their home country and found it difficult to make the change. I respected their choice and did not press them.

I am aware about the sacrifice on our  male citizens who had to serve two years of full time national service and continuing calls for reservist training in subsequent years, and who now have to face competition for jobs with foreigners who do not have this liability.

We need to find an effective way to reduce the burden on our male citizens. Imposing "differentiation" on non-citizens is not the only way, and it has its negative consequences. I wish to quote the saying "Two wrongs do not make it right". We should look for another solution.

I prefer the Swiss approach towards compulsory military service. Like Singapore, they are also a small country and wish to protect their independence. They had found a better way to achieve their goal of national defense without the types of issue faced in Singapore.

The solution in Singapore is to shorten the period of national service (to follow the example of Switzerland) and to give a higher allowance to our NS men, so that they will find that NS is not a sacrifice but is an advantage. There are advantages of molding the character of our young men through NS.

A few years ago, a young man from China told me that only a small percentage of males are called up for national service. It is like "striking lottery" as the call-up will lead to prospects of a better life in the future, e.g. to get Government jobs.

Economic growth of Taiwan and Singapore

Lucky Tan made some observations about Taiwan and Singapore which are quite different from DPM Tharman.

Later, I will also give my observations about Taiwan, based on what I saw during my previous visit and the observations of a Singaporean who lived there. 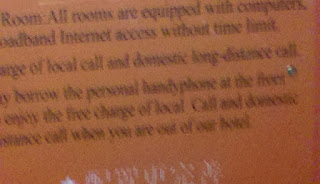 I stayed at the Golden Happy Hotel in Shantou,China. The services provided by the hotel is impressive. They provide a computer with access the free broadband internet. I removed the LAN cable and connect it to my laptop and it worked without any difficulty. They provide free Wi-Fi in the hotel lobby without password protection. A hotel guest can get a toggle to get free Wi-Fi in their hotel room.

I saw a sign in the lift lobby informing guests that all telephone calls made from the hotel, including domestic long distance calls, are free. They probably use VOIP outside of Shantou. The sign also said that the hotel guests can borrow a mobile phone from the front desk to use outside of the hotel and make free calls.

This is a most impressive hotel. Instead of finding ways to make more money from their guests, they focus on how to save cost for their guests. They provide comfortable rooms at RMB 248 per night (about SGD 50).

I accompanied my friend to a neighborhood police post in Shantou, China, to lodge a report about a missing document.

While waiting, I saw three large framed pictures showing the map of the district covered by the police post, the photos of the personnel in the post and the photos of the officers who perform the duty of audit.

I find the arrangement to be quite impressive. It improves transparency and accountability. I believe that similar arrangements should be made in Singapore.
Posted by Tan Kin Lian at 7:38 AM 3 comments: 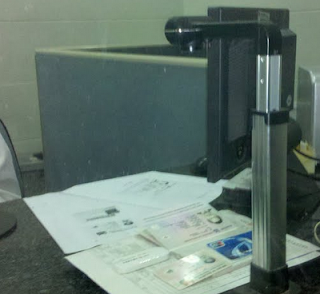 I made a transaction at a bank in China. They have more up-to-date practices. The customer has to enter a PIN number, instead of a signature. The documents signed by the customer are captured in a document camera - shown here.

I am not sure if our banks in Singapore already use similar practices. It is time to learn from China on their updated practices.