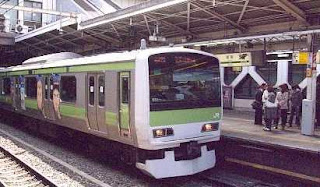 I am impressed with this very busy train. Before reaching each station, they will make an announcement in Japanese and English about the name of the next station and the door will open on the right or left side.

There is also a digital display that shows the names of all the stations on the line and the number of minutes to arrive at that station. This display is updated on reaching each station.

When I take the MRT in Singapore, I often have to look out of the window to see if the door will open on the left or the right side at the next station. In some trains, there is a digital display (which is often confusing) but in other trains, there is no such display.

The people in Tokyo knows how to provide relevant and useful information to the commuters. I hope that SMRT and LTA can learn from them.


I spoke to a friend today about my experience. He confirmed that he encounters this problem often, and often ended up on the wrong side of the train.
Posted by Tan Kin Lian at 3:47 PM No comments:

Many countries in Europe are facing a crisis. They have allowed hundreds of thousands of refugees from Syria and other countries into their country as an act of humanitarianism. Some of the refugees behaved badly and caused problems with the locals.

The European governments faced a dilemma. They have to deal with a humanitarian crisis and show compassion towards the genuine refugees who are freeing the bombs, shootings and fighting. But other people from the poorer countries, who are not affected by the war, are joining in the bandwagon to enter into the European countries for their welfare and a better life.

The Singapore experience
In the 1970s, there were boats of refugees freeing Vietnam. Some of them wanted to land in Singapore. The Prime Minister, Mr. Lee Kuan Yew, was far sighted. He refused entry to all of them. His reason was - Singapore is too small. We are not able to accommodate large numbers of refugees into our country.

The few refugees that entered Singapore were confined into a refugee camp and were sent to third countries who were willing to accept them. The refugees were not allowed to become part of the society.

This may seem harsh, but it was necessary. Mr. Lee foresaw that a soft attitude will encourage more refugees to brave the seas on their flimsy boats to come to Singapore.

Lesson from Singapore
The European countries could learn from Mr. Lee's approach. If the refugees enter into the country, they should be allowed temporary refugee in special camps that are secluded from the local population. After the end of hostilities, they should be sent back to their home countries.

Some of the refugees can apply to be allowed permanent residency.  This should be handled according to their eligibility and their ability to integrate into into the host countries. It should be separate from the humanitarian factor.

Conclusion
I hope that the approach taken by Singapore in the 1970s could be useful to the European countries in dealing with the refugee crisis.

Compare governance of Singapore with the United States

The government of the US comes at three levels - federal, state and local. They have election for their President, Senators, Representatives at the federal level, governors and legislators at the state level and majors and city officials at the local level.

The job of the President of the US is many times more complex than that of the Prime Minister of Singapore.

Do you want the ability to track your own vehicle on your mobile phone?

This will come in useful when your vehicle is driven by an employer or family member. In the case of a family member, you want to know that they are safe.

If your vehicle is stolen, you can find out where it went and where the vehicle is now located.

The tracking device has a SOS button. When it is pressed, a SMS is sent to your mobile phone.

You can play back the route taken by your vehicle for any day and time period during the past 60 days.

If this service is available for a modest fee, or is provided free by your insurance company, would you be interested to join it?

This is the prototype of a vehicle tracking system. To view this prototype, take the following steps.

a) Go to tklcloud.com/fleet
b) Click on [Testing]
c) Select a user, e.g. S03
d) Go to Play Back
e) Select a vehicle from the drop down list
f) Click on Go

Watch the play back of the route taken by the vehicle for the current date.
Try other dates and time period and watch the play back.
Go to Live Track and select on [All vehicles]. What where are your current fleet of vehicles.

Note - the movements of the vehicles are simulated in this demo. When it goes live, the actual movements will be recorded.

The Gravis poll showed that Clinton's lead over Sanders had been falling from the high 30s to 23%. A recent poll from TargetPoint showed a tie for both candidates. Take note that the TargetPoint poll is the most recent and has the largest number of respondents.
Bernie Sanders is likely to Nevada caucus on 20 Feb.

I met a security guard in Midview City. He is bitter about losing all his savings (more than $200,000) in the UK land sold by Profitable Plots. Because of this loss, he now has to work as a security guard.

He spoke to me about this matter two years ago. This is the first time that I saw him again, after two years. He is bitter that the government allowed this type of company to operate in Singapore and sell the overpriced land to the people.

He said that he still holds the title to the land plots and asked me if there is a hope that the land will appreciate in value when the UK government gave approval for rezoning to residential land.

I said that the real value of the land is probably one tenth of what he has paid for it. So, it will be difficult and will take a long time and some good fortune for the land to show a profit.

It is sad. But there is nothing that can be done now. I asked about his family, and he said that his children are now doing okay.

I hope that the government and MAS should be more proactive in preventing this kind of businesses to operate in Singapore.
Posted by Tan Kin Lian at 2:22 PM 5 comments:

Government agencies and government owned companies should set the example and employ their workers directly and pay decent wages to set the benchmark for other employees.
It is deplorable when they start to outsource for the purpose of cutting cost. By doing it, they are depressing the forcing the same workers to accept lower wages from the contractors.

This must give a scare to Hillary Clinton. From a lead of 23% in Nevada, the polls now show a tie with Bernie Sanders. The Nevada caucus will be held on 20 Feb.
http://www.realclearpolitics.com/…/nevada_democratic_presid…
Posted by Tan Kin Lian at 1:06 PM No comments:

Living in a time of deception