Here is the revised table with some of the facts corrected. It now showed that the flood occurred in the year 1591, shortly after the death of Methuselah. Lamech died 5 years earlier. All the descendents of Adam before Noah, died before the flood. So, the ages of birth and death stated in the Bible are consistent. Great! 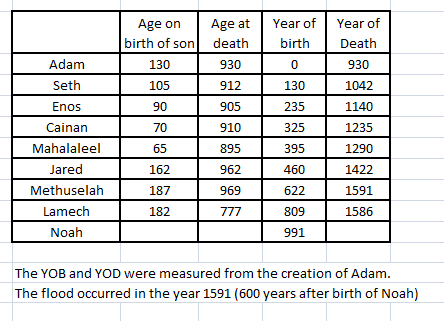 Your table missed out 1 person between Jared and Methuselah, which is Enoch (Genesis 5:21-24).
This should affect the year calculations, but not the fact that they have all died when the flood occurred.

Thanks. Look like you are a Bible scholar! I will check and update my table.

Main cause of flood at greater Bangkok area is tropical storm - Nock-Ten:

Tropical storm is an usual event each year. Contribution factors which make the Bangkok flood worst are:

1. Farm land were converted to indusrial estate outsdie Bangkok.
2. Cut of forest to build more resort for tourism at countryside
3. Cut of forest to fulfill the econnoic growth in PRC at north-Thailand & Lao Republic.
4. Population growth

Industrialisation, tourism and econ superpower are made by men. Which man and nation is responsible?

In Thailand, flood is not a bad thing. An usual tropical storm each year will bring rain water and cause mild flood to the farm land.

Rice farmers are very happy with the flood water to cultivate rice.
3-4 months later, rice farers are very happy to cut rice yield for self-consumtion and export. Both nature and Thai farmer make Thailand the No. 1 rice exporter.

If not mild flood and harworking Thai farmers, the shortage of rice might be like fousil fuel shortage.

The solution of Bangkok flood - A five years study by Chulalongkorn University end-1990s.

The Thai King, a medical doctor by training, had caution its peoples
ten years ago.

Unfortunately, the scientific study and prposal was trash by Thailand POLITICIAN !!!