How should the new transport minister handle this hot seat? 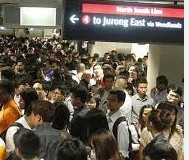 Dear Mr. Tan
The Ministry of Transport is a hot seat for any minister. Do you think that PM Lee will be able to find another minister to replace Mr. Lui Tuck Yew who will be resigning at the next general election? What are the key tasks that the new minister should carry out to win the confidence of the public?

REPLY
The replacement has to be an experienced and senior minister, such as Khaw Boon Wan, Teo Chee Hean or Ng Eng Hen. There is nothing much that the new minister can do to solve the problem of train breakdown due to the overload and to the poor conditions of the tracks and signals.

The strategy should be to get the support and understanding of the commuters. The following measures can be taken.

a) If there is a train breakdown, all the affected commuters should be credited with $5 into their fare card. This allows them to take a bus, taxi or alternative transport. At least, they are compensated directly for the inconvenience. This will be a heavy financial cost to SMRT, but the commuters might feel "sorry" for SMRT to have to give out these payments.

b) When there is a breakdown, the taxis and private buses should be alerted to provide the alternative transports at the affected stations. They can be informed through the mass media and internet. The travelling public can also be notified.

These are my ideas. Perhaps you can give your views on what needs to be done.

Teo Chee Hian and Ng Eng Hen dun have the guts to take up this hot post. Imagine having to deal with train breakdowns periodically, and be hammered by commuters, their pride can't take it as this glaringly shows up even big shot Ministers themselves are ineffective to solve the nightmarish rail problems. They are only of medical and army backgrounds, not engineering.
As for Khaw Boon Wan, can see he has a thicker face by putting up the Liang-Zhu wayang on Parliament, maybe the $ sign could tempt him, after only 4 years of high pay, he could retire from politics beautifully with a big bank account to boot.
The MRT nightmare is a fundamental structural problem that needs an expensive complete overhaul. Blame LTA, Govt Agencies always allot contracts based on the cheapest bidder. You pay peanuts, get monkeys instead.
Had met Mr. Lui once to solve a problem. Even though I dun belong to his constituency, he offered tremendous help fast, but this episode reveals his true character, he's too gentlemanly and nice to be a Transport Minister, too good to be a politician at all. His grassroots would cry to see him leave. But he made the right decision, politics is not his cup of tea, unlike his barking dog colleagues, he just can't hurt anyone, probably the only PAP MP/Minister who is real, not fake, not power and money crazy, genuinely willing to serve the people, the old PAP oldguard category.
God bless this man.
Try swinging the tigam game, the next money crazy PAP man willing to replace Lui is plentiful.