Some people like to use extreme cases to support their views.

Those who do not like unemployment insurance say that it will encourage people to be lazy and to abuse the system.

A German once told me that in her home town, many people become unemployed as the shipping building industry could not compete with Asian countries. The workers wanted to work, but had to take unemployment insurance as a last resort.

They felt ashamed to be rely on this type of welfare and actively looked for alternative jobs. The unemployment benefit was helpful to tide them over a period of adjustment.

In any system, there will always be some abuse, but it should not detract from the help that is being provided to the majority. Any abuse can be managed by requiring the benefit recipient to show that they are making the effort to find alternative jobs.

Many countries are aware of the pros and cons of unemployment insurance, and have decided to introduce this system, in spite of the potential abuse.

Singapore should now examine the need for this system, rather than be close minded and deterred by the potential abuse.

How can an aircraft get lost, and nobody knows where it is?
The airlines should have a global tracking system that shows where each aircraft is, and that connection cannot be switched off by the pilot. This is similar to tracking delivery tracks on land.
To track the aircraft across the oceans, it is possible to use the service of inmarsat. It covers the globe.
The data to be sent from the aircraft does not have to be detailed. It can just send the time and location every 15 seconds. If the aircraft stops sending the data, it is possible to send rescue party to the last location.

More about inmarsat service:
Inmarsat plc (LSE: ISAT) is a British satellite telecommunications company, offering global mobile services. It provides telephone and data services to users worldwide, via portable or mobile terminals which communicate to ground stations through eleven geostationary telecommunications satellites. Inmarsat's network provides communications services to a range of governments, aid agencies, media outlets and businesses with a need to communicate in remote regions or where there is no reliable terrestrial network. The company is listed on the London Stock Exchange and is a constituent of the FTSE 250 Index as of December 2011.
Posted by Tan Kin Lian at 11:35 AM No comments:

Dear Mr. TanThe mindset of most civil servants is - "My main concern is not to make a mistake. It does not matter how much it cost or the quality of service to the public. So long as I follow clear instructions, I will be all right".Does this mindset bode well for the future? How can the mindset be changed to focus on reducing waste, reducing cost and improving service to the public?REPLYThis mindset has been ingrained over a few decades. It will take a lot of effort to change the mindset. Even if someone wants to make a change, the civil servants will not trust him, and will not feel safe about making the change. We are stuck with it.
Posted by Tan Kin Lian at 11:34 AM 2 comments: 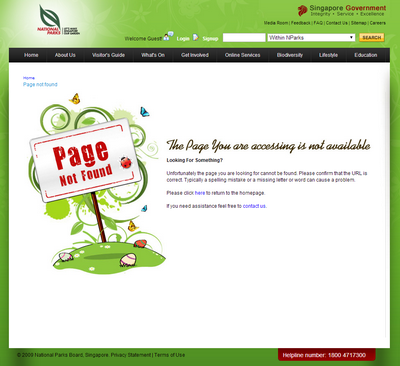 This is the third time that I tried to register to speak at Hong Lim Park at 4 pm on 3 May, and it failed again. After entering the full details, I get this page.
When I called the helpline each time, the staff answered my call politely but was not able to take down my application by phone, i.e. refused to take the responsibility.

Our G is making the citizens waste a lot of time on their inefficiency. They can't even have a simple website to work properly.
Posted by Tan Kin Lian at 11:32 AM No comments:

Improved benefits for NS men gets criticism from woman's group

SINGAPORE — The Government’s plan to enhance housing, healthcare and education benefits for operationally ready national servicemen has received a pushback from a gender-equality advocacy group, which disagreed that support for these basic requirements should be linked to military service.http://www.todayonline.com/singapore/awares-pushback-more-benefits-nsmen-ignites-debateMY VIEW:A better approach is to reduce the full time and reservist obligations by about half from the current levels and to pay the NS men adequately for the time that they have to spend on "national service".

This will reduce the pressure to benefit them in other ways, that cause questions to be asked by other segments of the society.
Posted by Tan Kin Lian at 11:32 AM No comments: