Bernie Sander's "Medicare for All" is better than Obamacare

Obamacare is facing issues. The premiums are going higher. For profit insurers are considering to exit the market.
The problem? It is not able to control the health care cost.
My view: Bernie Sander's "Medicare for All" is a better solution.
http://www.cnbc.com/…/woman-who-ran-obamacare-warns-of-big-…
Posted by Tan Kin Lian at 6:05 AM No comments:


I wanted to submit an enquiry with IRAS using this webform. It required me to enter two compulsory fields, but there was no drop down list to enter the fields.

I had to re-enter all the information on a new form.

The people who design these online systems do not know the unnecessary trouble that they give to the public. They only think about their own convenience. 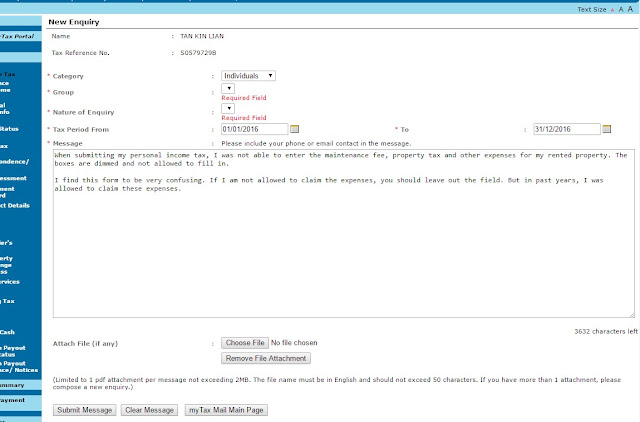 Bernie Sanders and the labor dispute in Verizon

Sisters and Brothers,
The CEO of Verizon makes almost $20 million a year in compensation. He leads one of the most profitable companies in the country.
Yet Verizon wants to take away employees' health benefits. Verizon wants to outsource decent-paying jobs. Verizon wants to avoid paying federal income tax. And right now, Verizon is refusing to sit down and negotiate a fair contract with its employees.
In other words, Verizon is just another major American corporation trying to destroy the lives of working Americans. But this time, Verizon's employees are fighting back.
Thousands of very brave employees of Verizon and Verizon Wireless are on strike until they can get a fair contract. They made a very difficult decision that puts their families at risk -- but it's a choice they made to stand up for justice against corporate greed.
I'm asking you today to stand up and tell the CEO of Verizon that you think Verizon employees deserve a fair contract that protects health benefits, guarantees fair pay, and stops outsourcing. Click here to add your name in support of Verizon employees.
ADD YOUR NAME »
Twice last week in New York City I stood with Verizon workers in the streets. I did so because they're doing something very brave: they're standing up not just for themselves, but for the millions of Americans who don't have a union.
The working class of this country deserves to earn decent wages, decent benefits, and not see their jobs go to low-wage countries.
Verizon's CEO doesn't think that. He called me "contemptible" for saying that his employees need a fair contract, and that Verizon should pay its fair share in federal income taxes.
What I think is contemptible is CEOs with multi-million dollar compensation packages, presiding over extremely profitable companies, and still refusing to give their employees fair contracts.
Corporate greed is a scourge on this country, and it will take all of us standing up for justice in order to rein it in. One significant way you can stand up to corporate greed is by standing with Verizon employees who are out on strike.
Add your name and say you support Verizon employees who are standing up to the CEO in order to get a fair contract with health benefits, fair pay, and job protections.
Corporate America is slowly beginning to realize that they cannot have it all. Thanks for helping them know it.
In solidarity,
Bernie Sanders
Posted by Tan Kin Lian at 8:02 AM No comments:

This website allows owners of units in condominiums to indicate their interest in a collective sale.

One condominium has started and obtained 12% of owners to express their support. This number will keep increasing over the next few weeks.

This is an encouraging and exciting development. I hope that SMRT will make it a success. http://news.asiaone.com/…/smrt-introduce-24-seaters-driverl…
Posted by Tan Kin Lian at 1:59 PM No comments:

Which is the newest condominium in Singapore that has freehold tenure? You can find the answer here:http://www.tklcloud.com/colsale/f_condo.aspx
Posted by Tan Kin Lian at 8:31 AM No comments:

This portal allows you to view properties for rental - houses, apartments, rooms, offices. You can also post your listing for free.http://leaseproperty.sg/home.aspx
Posted by Tan Kin Lian at 8:30 AM No comments:

Which are the newest condominiums in Singapore? What are the oldest? Which are the biggest (in terms of number of units?) You can find the answers here.

http://tklcloud.com/colsale/f_condo.aspx
Posted by Tan Kin Lian at 3:28 PM No comments:

Donald Trump and Hillary Clinton notched resounding victories in New York, answering questions about their command of the race as the front-runners moved significantly closer to their party's nominations.
Their decisive wins will usher in a new phase in the 2016 presidential campaign. Both Trump and Clinton have fought bitterly for months to keep their rivals at bay, each slogging through primary contests that exposed vulnerabilities in their candidacies and campaigns.
On Tuesday, Trump came close to sweeping New York's 95 delegates -- a development that could help the Manhattan real estate mogul win the GOP nomination outright and avoid what would be a messy contested convention in July. CNN projected Trump will clear the 50% threshold to take all of New York's 14 statewide delegates.
Clinton's win, meanwhile, will go a long way in blunting the momentum of Bernie Sanders -- the liberal Vermont senator whose unexpected popularity has dogged the former secretary of state.
It was a sweet homecoming for the front-runners, who each have deep ties to New York.
Last year, Trump and Clinton -- in wildly different settings -- launched their White House campaigns in New York City. On Tuesday, it was again in Manhattan that both Trump and Clinton confidently declared that they were within reach of the nomination.
Posted by Tan Kin Lian at 1:02 PM No comments:

Bernie Supporter,
Last week, when we asked for 15,000 of you to call New York, we honestly weren't sure if we could hit that target. But Sunday night when we ran the numbers, we found that you smashed through our original goal of two million calls, and put more than THREE million calls into New York in just two days.
That is simply incredible! And it could make a huge difference today.But we can't stop now. Despite a ton of on-the-ground momentum, Bernie is still down a few points in the polls this morning as New Yorkers head out to vote.
URGENT: we need 7,500 of you on the phones for one hour todayto make sure Bernie supporters in New York get out to vote. If 7,500 of you get on the phones for at least one hour, we'll put another million calls into New York when it counts the most – on primary day.
YES, I WILL CALL BERNIE SUPPORTERS NOW TO HELP WIN NEW YORK

An upset victory in New York would be game-changing for this primary and this movement, and put us on a path to win the nomination and the White House. We know we have the grassroots support to pull it off, but the critical challenge is getting Bernie's supporters to the polls. Your calls today could literally mean the difference between winning and losing tonight.
Call New Yorkers now and help turn Bernie supporters out to vote.
In solidarity,
Team Bernie

Bernie Sander's goals are not "pie in the sky"

Last night, while we were holding our largest rally of the campaign, a top Clinton surrogate told a much smaller audience that Hillary Clinton was under attack, and her supporters needed to "stand up and fight back, stand up against those idealists."
Let me tell you something, sisters and brothers: there is nothing we have said in this campaign that is pie-in-the-sky, that is utopian. Nothing.
We are the wealthiest country in the history of the world, and we can create an economy where nobody who works 40 hours a week lives in poverty, where health care is a right for all Americans, and where kids of all backgrounds can go to college without crushing debt.
When we launched this campaign, I told everyone they should not underestimate us and that we were running to win. They thought we were pie-in-the-sky then, too. But tomorrow we have a chance to win yet again — in Hillary Clinton’s own backyard. I need you to continue to fight with me.
Right now, thousands of people are contributing $2.70 to help us win New York tomorrow and the five states that vote in one week. Add your contribution to theirs right now and we can win this primary.
The energy, intelligence, and idealism of Americans, especially young Americans, have been the greatest agents for change in this country for generations. Those qualities have also powered our campaign from the start, and it’s also what is going to help us take this country back from the billionaire class when we’re elected in November. But first, New York … tomorrow night. I need you with me.
In solidarity,
Bernie Sanders
Posted by Tan Kin Lian at 11:06 PM No comments:

Does this sound familiar to you, sisters and brothers?

"The corporations and special interests have their voice in Congress, and they have too many members scared of their power. What Congress needs is a progressive voice who is unafraid to take on these powerful interests – who is willing to fight for all Americans, not just the wealthiest 1 percent."

Bernie Sanders was asked if this proposal to provide free tuition in public colleges also apply to students from high income families. His reply was that it applies to every student who is a resident of USA.

His basic principle is that public services, such as health care and college education, is available to all eligible persons, regardless of income.

It may appear strange to many people. Why should families who are well off be given the subsidy from the government?

Bernie Sander's approach make a lot of sense. It is productive and cost effective.

Singapore suffers from the waste of using many civil servants to spend their time on evaluating eligibility for welfare benefits based on income and other criteria. In some cases, the cost of the administrative is higher than the actual benefits provided to the recipients.

Bernie Sanders attracted a massive crowd of 27,000 in New York City. Will the New Yorkers be different from Singaporeans? Will the large crowds translate into solid votes for Bernie Sanders (unlike what happened in Singapore).

We will know by Wednesday morning in Singapore. New York will conduct is primary election on Tuesday. It is a closed primary, which meant that Independents cannot vote in the Democratic Primary.